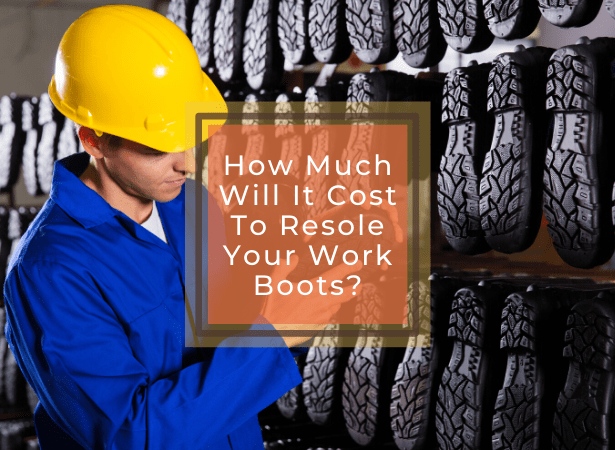 Very often, we see people throwing away their used shoes because of a slightly worn-out tread or fraying stitching. Its because they either do not know that their shoes could be resoled perfectly, or they think that the resoling would cost as much as buying a new shoe. That, however, is not the truth. Your favorite work shoes can not only be resoled but they can also be rebuilt in less than half of what the new shoes will cost.

The cost of resoling depends on how damaged your boot's sole is and the place where you're getting your job done. Cities like New York and LA cost more than small towns. If the tread has reduced in its lugs or pattern, that might not cost you much. However, if your soles have holes in them, then it might cost you a bit more.

If your heel came off and the old one can't be fixed, you might need to replace it with a new one which could cost somewhere between $55 to $120 depending on the type of heel, the boot, and the cobbler's fee.

P.S. We recommend rubber soles because they are durable and provide great traction in snow or rain.

Also, keep in mind that these resoling could take a week or two depending on how busy your cobbler is.

However, your case might not be so serious and all you need is a plastic heel cap on the bottom which would only cost you around $5 to $10. If you only want to repair the stitching of your boots that would cost around $15 to $25 while replacing the gusset would cost around $55 to $75. These repairs could only be done in a day or two depending on how busy your cobbler is.

Not Sure if Your Boots Need to Be Resoled?

If you're not sure that either your boot's need to be resoled or not, don't worry that's very simple and we'll explain that too.

First of all, if your shoes which were previously providing adequate traction, suddenly start losing traction, it's time for a resole.

Another sign that your boot's sole need replacing is when water starts seeping into your waterproof boots. A spongy and weak sole, which you can know by pressing your thumb into its center, is also a clear indication for sole replacement.

Besides these, signs of stitching or welting coming off also require sole replacement but it's often in the early stages and can cause you much less than the other signs mentioned above.

If your shoes require changing other parts such as parts of the leather upper of the boot, nylon fabric, outsoles, midsoles, insoles, shanks, eyelets essentially any part of the boot other than sole than its time to rebuild your boot.

Rebuilding your shoes include everything from replacing one or two parts to completely tearing the shoe down to its stitching and rebuilding a new shoe with new materials. However, making too many changes will eventually be costing you more and in case of boots that cost less than $120, we won't recommend that.

The best use of rebuilding your favorite boot is when you are not satisfied with one aspect of the shoe, but you love every other feature. For example, let's say you like your work shoes but wearing and putting them off requires time due to its lacing, you can simply change the eyelets or lacing system.

Rebuilding your boots wisely is like spending pennies on the dollar as compared to buying new ones. Therefore, if you love a pair of boots but do not like one feature you do not have to give up on that boot but rather get them to rebuild and have that feature replaced.

Another thing to keep in mind is that rebuilding takes more time and depending on the service required and how busy your cobbler is, it could take from one week to two weeks.

Resoling and rebuilding can be done on the same boot several times and taking good care could extend the life of your boots. However, overdoing it could cost you more than the price of new work boots. Moreover, don't be afraid to resole your old favorite boot. It is cheaper than buying a new one.